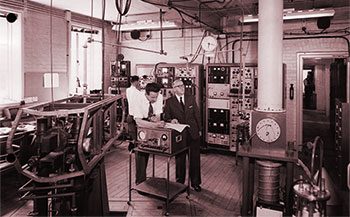 Recent improvements in atomic clocks – both to their accuracy and the development of more compact versions – are now supporting a wide range of new quantum technologies, from new communications tools, to navigating in space, to geological measurements.

Atomic Clocks are a quantum technology in their own right. They use the frequency of electromagnetic waves (microwaves or light) to create ‘ticks’, and the quantum properties of atoms to lock these waves and ensure they never drift.

But they are also underpinning many new quantum innovations. Some sensors, for example, use the precise time that light reaches a detector to identify what it has bounced off or passed through. This precise timing, combined with detection technologies, can be used to ‘see’ out-of-sight objects or peer through fog and snow.

One of the most important new commercial uses of atomic clocks is for securing financial transactions.

Every financial transaction needs a time and date stamped on it. This is now legally required for trading companies, to establish an audit trail of exactly when a transaction was made. This precise timing capability can also be used to monitor the company’s network, discovering sources of undesirable time delays.

High frequency trading needs to be recorded down to one hundred microseconds and must be traceable to the global timekeeping system: UTC (universal coordinated time). Many such timing services use GPS signals, though these can be disrupted by hacking attacks and solar storms, which could be disastrous for business conducting thousands of trades per second.

NPL has stepped up with an atomic clock-based solution, NPLTime®. This provides a certified precise time signal traceable to UTC. The signal is maintained using NPL’s atomic clock ensemble which is also used to maintain the UK’s National Timescale, UTC(NPL).

Atomic clocks are also widely used in navigation, and especially space navigation. Spacecraft need to calculate distances from known bodies – man made or celestial – to confirm they are navigating along their programmed flight path. Doing so involves precisely measuring the timing of incoming signals to establish their location.

However, clocks on board a spacecraft are knocked around a lot more than they are in measurement laboratories, so new technologies are needed to maintain accuracy during this long and bumpy ride. The Quantum Metrology Institute – drawing on long expertise of laser and atomic clock research, is developing an ‘optical stabilising reference cavity’ for the European Space Agency. Laser light is contained within the cavity between a pair of super-polished mirrors kept a precise distance apart. These cavities could be used to lock the frequency of on-board atomic clocks – and prevent them drifting.

Such highly stable cavities will be at the heart of next-generation timing and navigation, and will help navigation clocks maintain high accuracy throughout years of being jolted about in space.

Back on earth, optical atomic clocks are being investigated as potential instruments for measuring gravity.

A transportable optical clock, developed by PTB, the German Measurement Institute, was taken into a tunnel high inside a mountain, and compared with a second clock at INRIM (the Italian measurement institute) in Turin, 90 km away and 1000 m lower down. The comparison was made using a frequency comb provided and operated by NPL. By detecting the gravitational redshift of the clock operating frequency, the team measured the gravity potential difference between the locations.

This work, published in Nature Physics, could allow scientists to monitor continental height changes related to sea levels and the dynamics of ocean currents with unprecedented accuracy. It will also lead to more consistent national height systems, helping to prevent potentially costly mistakes in engineering and construction projects.

Out of the lab and into industry

Underpinning these new possibilities is the development of practical, easy-to-use atomic clocks which can be used without complex setups and in-depth expertise.

One major advance comes from the new MINAC Miniature Atomic Clock, developed by NPL and now being commercialised with Teledyne-e2v. The prototype caesium atomic clock is a discrete and portable timing reference, suitable for services such as energy supply, transport, mobile communications, data networks and electronic financial transactions. Today, these services rely on GPS for a timing signal which is easily disrupted.

On a slightly larger scale, an ytterbium ion microwave clock prototype has also been developed which holds a cloud of electrically charged atoms that can be used as a frequency standard. This system offers greater accuracy than the MINAC, but is still compact enough to be suitable for many industrial timing applications.

At the higher accuracy end, NPL continues to develop state-of-the-art optical atomic clocks, using (in different systems) strontium and ytterbium ions and strontium atoms as the fundamental reference for frequency.

Building on this capability, NPL is creating a range of new clocks which offers different combinations of accuracy balanced with size, weight and power to cover a spectrum of potential timing applications, including those discussed above.

As clock technology advances to allow smaller, cheaper devices to be built with high specifications, they are finding new commercial uses in the emerging quantum industries. Accurate timing helps us measure how far a particle travelled, or how its trajectory compares to other particles, which will underpin many sensing and communication technologies. Distributed timing can improve the operation of a network, or establish the exact sequence of fast events, such as the transfer of electronic information. Atomic clocks, one of the first practical applications of quantum physics, are now instrumental in a race to commercialise many new practical applications of quantum physics.